So after more than three months, me and Robin’s internship is finally coming to an end. It has been an awesome experience for us to work at Montie Design and we have learned an incredible amount of new stuff. Some of the Montie Gear stuff we’ve been working you might have already seen if you’ve been hanging around this blog. Lately we’ve also been given the opportunity to work on some client projects which have been very fun and challenging. These products you’ll probably be able to find in Montie Design’s portfolio in the near future.

All in all, we are very greateful to have been able to come over here for this internship. We’ll will bring back with us a lot of new knowledge and a lot of fun memories.

So the belt clip ball dispenser is finally coming together. After testing more mock-up models the decision was taken not to use any plate or similar to separate the balls from the magnet, as more than one kept falling off when trying to pull only one off. Instead the magnet will be coated with a durable finish and the balls will be in direct contact with it. This simplified the design significantly, but put increased the demand on the aesthetic form of the back plate, as this now became the mail feature of the whole product. A simple plate can have many different forms:

One option was to add a top bumber to create a feeling of better encapsulating the balls, as well as giving more depth to the product. Unfortunately, the manufacturing complexity of adding this feature was greater than expected. As this would drive up the cost of the product a lot the decision was taken to put this feature on hold for now.

As for the final design the initial round magnet was kept and the plate form includes some curved lines to follow the magnet while still keeping some edges to go with the rectangular belt clip. After quite a bit of struggle finding a good form, this one actually feels pretty obvious I would say! Let’s just hope the prototype will look just as good!

Have a good weekend!

So the slingshot sights are sent off for prototype parts to be made and we’re all looking forward to try them out once they get back! Since then I’ve been working on developing some handy ball dispensers for the slighshot ammunition. As the most frequently used ammo for slingshots are steel balls it didn’t take long to realize that magnets could be very useful for these products!

After receiving some a bunch of different magnet samples, some early ideas were tried out by building some quick mock-up models. Most ideas worked out really well with the magnets and after a day of testing we had three pretty solid concepts; one in aluminium, one in leather and one that could go on your wrist or belt.

This friday has been spent exploring different designs for these concepts. We’re getting somewhere with all of them and the next step will be to build some more accurate prototypes to fully test the functionality. Will keep you posted  on how that goes! Below are some sketches of possible designs.

Arriving as an intern at Montie Design really gets you straight into the action. I study Industrial Design Engineering at Chalmers University in Sweden and will spend the summer as an intern at Montie Design. Some of the smaller project us interns have started are based on accessorizing the popular Y-shot slingshot. Many ideas are flowing and below is one example which is a sight system that will be mounted on the side of the slingshot. 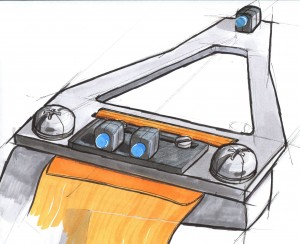