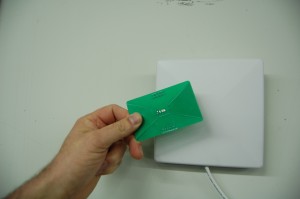 (Morrisville, N.C.) Collaborative product design and development firm Montie Design is now actively selling its innovative radio frequency identification (RFID) detector card to domestic and international clients. Small enough to fit into a shirt pocket or clip to an ID badge, Montie Design’s product enables users and installers to detect whether an RFID reader is actually sending out a signal.

“We have sold cards in six foreign countries and have interest from distributors in Japan and Sweden,” said Karl Frank, Montie Design’s Business Development Manager. The $20 cards were released for purchase just two months ago. “We have also sold cards to the U.S. Department of Homeland Security and users of every kind from research labs to system integrators across the United States,” Frank added.

Manufacturers and retailers utilize RFID tags heavily in supply chain management for identification and tracking purposes to improve efficiency and save costs. They are growing in popularity as replacements for barcode tags due to their ability to be read at a distance without contact. Every RFID tag attached to a product contains an integrated circuit and antenna, and is dependent upon the functionality of a corresponding RFID reader to effectively read and record the information encoded on the tag.

According to Montie Roland, his company’s product – assembled by GRT Electronics in Raleigh, N.C. – helps determine if an RFID reader might have suffered a hardware failure, a triggering sensor may not be working, or communications with a back-end system may have been interrupted.

“The first question during setup or troubleshooting of an RFID system is whether the system is radiating a signal from the reader’s antenna,” he said.

The Montie Design card works with European and Japanese RFID frequencies as well.

To learn more, or purchase a card, visit www.montie.com.

About Montie Design
Montie Design is a collaborative product design and development firm with core competencies in industrial design, mechanical design and fuzzy front end services. Implementing a client-centric approach in taking products from concept to marketplace, Montie Design balances vision with usability in realizing products that are economical to manufacture, elegant and robust. The firm operates out of the Research Triangle Park region of North Carolina with access to industry-leading technology, resources and innovative thought. For more information, visit www.montie.com.

If you turn on the TV or listen to the radio, you hear a lot of bad news.  Today we have some good news about a product designed and produced locally.   We were featured today on RFID Journal. The article is about our RFID Detector card. This is our first Montie Design-branded product. You can view the article at:  http://www.rfidjournal.com/article/articleview/4646

The text of the article follows:

The device illuminates an LED upon sensing RFID transmission from a UHF reader, thereby offering a low-cost tool for installers and RFID reader owners.

Mar. 2, 2009—A new device from Montie Design, a newcomer to the radio frequency identification market, will enable RFID users and installers to detect whether an RFID interrogator is operating properly during or after installation. The $20 device fits into a pocket or clips to an ID badge, and is currently being marketed to RFID installers and users.

The idea for the device originated with a friend of one of the company’s designers late last year, according to Montie Roland, CEO of Montie Design, a two-year-old design firm located in Morrisville, NC. The company typically designs industrial and mechanical products, such as bike rental stations, solar panels and encasing for RFID transceivers and other products. Roland says his seven-engineer staff comprises “generalists” who develop a variety of items that are then marketed and distributed by the firm.

It took approximately two months to produce that product, Roland says, which consists of an LED and an antenna integrated into a PCB. The product is assembled by GRT Electronics, located in Raleigh, NC.

Thus far, says Karl Frank, Montie Design’s business development manager, the firm has sold units to the U.S. Department of Homeland Security, as well as to several RFID equipment manufacturers (OEMs) and installers. Manufacturers or integrators can have their logo silk-screened onto the detector, Frank says, which they can then utilize as promotional tools, such as providing them to customers during installations.

To operate the detector, a user holds it several inches to several feet in front of an ultrahigh-frequency (UHF) reader antenna. If the device detects an RFID transmission from the reader, a blue LED in the center of the device illuminates. If the interrogator is not transmitting, the light remains non-illuminated. The device is designed to be inexpensive and small enough to fit into a pocket, Roland says. It does not measure the quality of transmission, but simply detects whether transmission is present.

Roland envisions systems integrators employing the detector to confirm that new readers being installed are functioning properly, and by end users conducting troubleshooting after installation. He indicates he has received a surprising number of enquiries regarding whether the device could be utilized in public places to determine whether readers were attempting to skim information off of RFID tags in licenses, passports or loyalty cards. The detector, he notes, would not be very effective because it must be located within a few feet of the interrogator in order to detect its transmission, and since it only detects UHF transmissions.

“That was very unexpected—the interest in using a device like this for privacy,” Roland says. “We realize now that there is a very large market for that, and we have such a product on our product road map.” It will be several years before the device is launched, he adds, noting that it would need to be an active RFID detector, and thus would require a battery. It would also be more expensive than the $20 RFID detector, which contains no battery and detects only transmissions from passive reader systems.

In the meantime, Roland says, the company is developing another version of the existing RFID detector for the 865 to 867 MHz range—the UHF band used in Europe—and another to detect high-frequency transmissions.