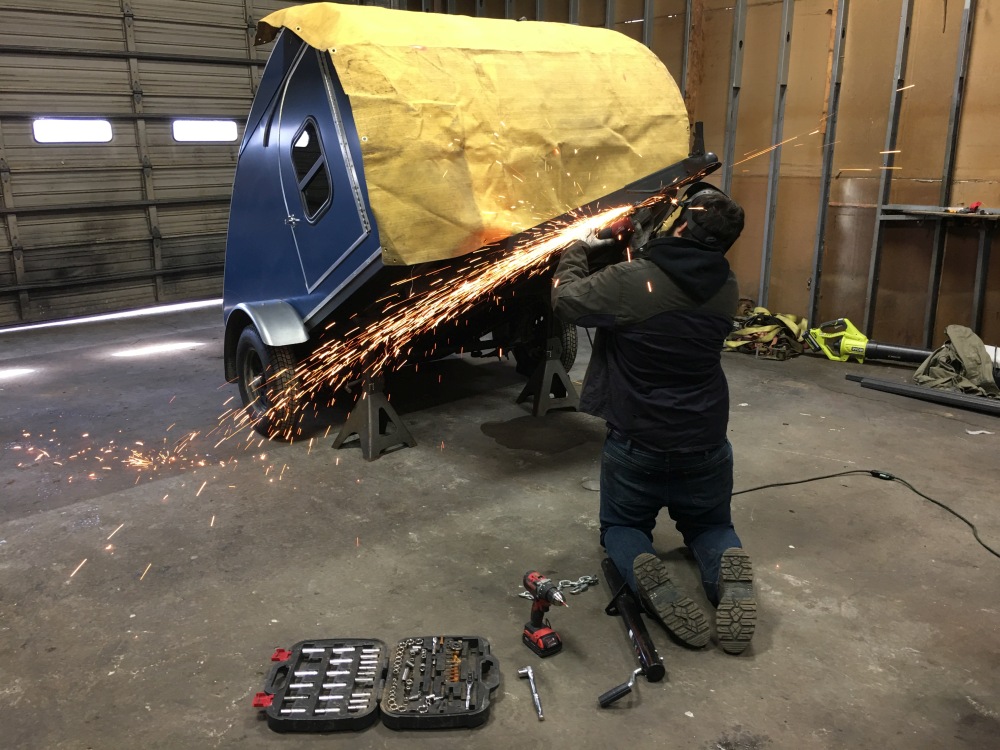 The teardrop trailer has been a work in process. We’ve wanted to add more capability and storage, but I didn’t want to have a big impact on ground clearance or break over angle. Moving water, propane and the spare tire to the trailer means more space in the tow rig (either or Wrangler TJ or 4Runner).

Another challenge is the 200 lb tongue weight limit on the Wrangler. Once we get everything loaded on the trailer, I can check the tongue weight. I had relocated the battery to the rear of the trailer and that will help off set some of the additional tongue weight that we are about to add.

Items for this round of upgrades:

First step was to trip check that the bumper on the tow vehicle wouldn’t hit the jerry cans at the minimum turning circle. That also required a Bojangle biscuit since I was already in the Bojangles parking lot. This was just before the virus hit.

Once we had the lower guide plate for the jack removed we could start verifying the layout of the can holder, tongue jack, propane tank and spare jack.

One of the challenges was attaching some sort of frame to the front rail of the trailer frame without getting the weld bead too close to the blue skin and causing heat damage to the skin finish.

We also found a structural weld that was not adequate and could have caused a failure on the trail. The tire winch mount is bolted along the top and welded along the bottom. The weld pattern also addressed the frame weld issue and fixed the weak spot with the bad weld.

It was a lot of work. It would not have happened without Maverick Metal Works

Once we have the trailer out and outfitted, we’ll take some pictures and show off the new gear.